It is really cold and snowy outside. I feel like I have been stuck home because it is too cold to be outside and my kids keep gettiing sick which makes us stay home more. My poor babies. I also watch my nieces and nephews during the week, so that helps to keep me home even more in the winter. If you have ever tried to get kids ready for winter weather, you know exactly why I am not too excited about heading out.

So instead of making the same old thing, I decided to try to switch up my normal, brothy tortilla soup into something a little different. I have made quite a few pureed soups before that we love, and thought we should try out a tortilla soup version. This is going to be too spicy for kids, but perfect for adults who like a little spice. 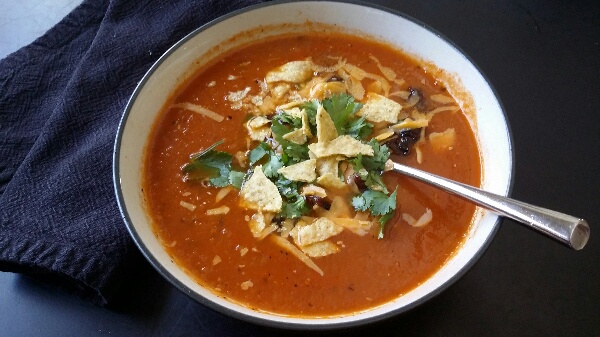 Place cut peppers and onion as well as the garlic on a baking sheet. Drizzle with olive oil. Broil until peppers are blackened (watch out for the garlic burning), about 5 – 7 minutes. Pour can of diced tomatoes in the blender along with the tsp of ground cumin. Once broiled vegetables are ready, add them to the blender and pulse until pureed.

Heat up 4 cups of chicken broth in a dutch oven, or large pot. Add pureed mixture into the broth and stir in ancho pepper. Bring to a boil and cover. Simmer for 30 minutes. Add juice of half a lime before serving.

We also garnished our soup with the carnitas that we made a couple nights before.

This soup was delicious. Seriously.