I have been trying to perfect my baguette making skills for quite a few years now. I decided to try a new baguette recipe from Paris Boulangerie Patisserie Cookbook by Linda Dannenberg. It is called Baguette Parisienne, and they turned out pretty well. I just need to find out how to get a better crumb on my baguettes, but until I figure that out we will just have to enjoy these homemade baguettes. 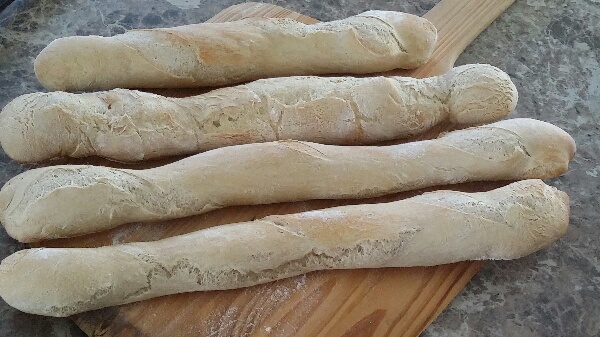 Combine water and yeast. Let sit for 5 minutes to bloom.

Add flour and salt to a stand mixer with a kneading hook attachment. Pour in bloomed yeast and water mixture. Knead for 15 minutes until dough is sticky, soft but firm. Pour into a clean bowl and cover with a cotton cloth. Let sit for one hour or until it is doubled in size.

Turn dough out onto a lightly floured surface and cut into four. Each quarter, flatten with palms of hands until dough is a rectangle. Then fold short ends into center from each side and press down. Turn and press down with palms of hands and fold into itself again. Then roll out into a skinny baton shape. Let rest on a floured surface with a cotton cloth seperating them from each other. Rise for 45 minutes.

Add a pan of water into the oven while preheating to 450°F.

Turn baguettes onto baguette pan or use a pizza peel to put directly onto a baking stone.  Bake for 15 minutes at 450°F. Remove the pan of water and bake at 400°F for 8 minutes. Remove from oven and let cool slightly before eating.

I usually freeze what we aren’t goint to eat, wrapping them in foil. To reheat, I put the bread, still frozen, in a 400°F oven for about 10 – 15 minutes. Take out of the foil and put back into the oven for 5 more minutes, or until the crust feel crisp, not soft.